A Great Result in Softball for Glenbrae

On Wednesday 27 February, the Glenbrae Softball team went to Dunkirk to a softball tournament. When we got there,every school was already there and we were nervous. Our hearts were pounding fast making our blood flow speedily around our body like Usain Bolt on his fast legs. Mrs Maruariki came with a paper and said that we were playing against Ruapotaka first. We were happy about it because they had really good players in their team. It was 9:30, all the schools sat together at the front and the people from Auckland Sport spoke to us about having fun and also revealed the schedule to us. Shawn from Auckland Sport announced that Glenbrae was playing against Ruapotaka first on field 7.

Both schools walked together to field 7. Mrs Maruariki set up the field and EEERRR!!, the sound of the horn screamed at us telling that we have to start the game. My heart pounded even faster and I was so nervous because I thought I might make a mistake during the game. Each captain from each team chose who is batting or fielding first. The captain of Ruapotaka chose to bat first. The team cheered. The fielders of Glenbrae went into positions. I was in base 3, Phoenix was in base 2, June was at base 1.Tame’e and Anthony were shortstops, Christian and Eseki were the outfielders, Nathaniel was backstop and Katalina was the pitcher. “BATTER UP!!” the umpire shouted.The first batter walked to the home base, holding up the bat. Katalina pitched the ball and WACK!! the ball went high and the batter ran to base 1 but Christian caught the ball and “OUT!!” shouted the empire. The second batter came up. Katalina threw the ball and the batter hit the ball which rolled to Katalina who threw the ball to June and she caught it and “OUT!”.“Two out one more to go!” I called out to my team. I felt energized and we had a good feeling we were going to get the third batter out. The third batter came up nervously.Katalina pitched another good ball and WACK! the ball came beside me and I caught the ball and “OUT!!” we cheered.

At the end of the games Glenbrae came second. We felt exhausted but happy at the same time. It was such a great game. Next year, I’m off to Tamaki College and I wonder if their softball team competes with other college teams. My goal is to try to be part of the team because Softball is my favourite sport and I love catching the ball and hitting it.

On Wednesday 27 February 2013 some lucky students from Glenbrae school were able to participate in a softball tournament  at Dunkirk Reserve. At about 9:00 am  we left school on the road to Dunkirk reserve. By the time we got there all the participating schools were already there.


Next we started to do some warm ups. We threw the ball around and then we started batting the ball. After a while we had to sit down so that they could give us our schedule. Having heard the instructions we went to our first game.


The first team we played against was Ruapotaka we had a great game but, Ruapotaka won. They were very good at softball. The next team we played against was Glen Innes Primary Green. We were told that we could choose to field or bat  based on the result of the referee throwing the bat in the air. The captain of the team who would catch it, and whose hand was on the top, would choose if they would like to field or bat. We won that game ten to seven.


After that it was Morning tea/lunch we had half an hour so after we finished eating we practiced. When time was up we played against Glen Innes Primary Red. We won that game and then at the finals we played against Ruapotaka for second or first place. All we could hear was screaming, and shouting. We were focused. Then we saw that Ruapotaka played an awesome game and won the game and were placed first. We were very happy for them.. Glenbrae School had second placing. We were so happy because at least we had come second. We all went back to school when it was almost home time. Everybody congratulated us for coming second and then we went home very tired but pleasantly happy.

One very sunny day at the Glenbrae pool, the students from Room 10 were first to go for their swimming lesson. The instructors were waiting for us.

First they tested how good we are at swimming and they divided us into three ability groups.

I was in the top group. I went inside the pool which was as cold as the waters in the Atlantic Ocean.

The instructors taught us how to swim using  freestyle, backstroke and breast strokes.

At the end of the lesson I felt like it was one of the most enjoyable times of my life. It was exhausting at the same time. 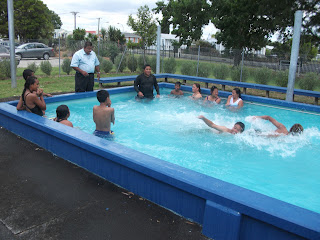 By Christian
Posted by Mrs Raj, Glenbrae at 21:37 1 comment:

The water in the swimming pool was freezing. It was as cold as the ice on the North Pole.
I hopped in the freezing pool, went under the water and got up so quick that I was almost out of the water in a flash. Everyone was in the pool was shivering because it was so very cold. Later on people started to swim because they got used to the water. The teacher taught us freestyle strokes and correct breathing techniques. After the swim, towards the end, the class got some free time so we could do anything we wanted to do like handstands and back flips but not bombing the pool. 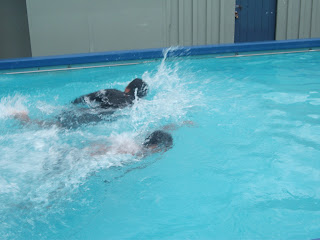 Alex
cheerful, fun, kind
lover of cars, zombie games and Harley Davidsons
who feels happy when he wins a game
excited when he goes places
sad when he loses a game
who wonders what happens when someone dies
who fears Gorillas
who would like to travel to America
who is not able to play rugby
who dreams of going to university to study.
Posted by Mrs Raj, Glenbrae at 21:01 No comments: