What a wonderful way to end the school term. 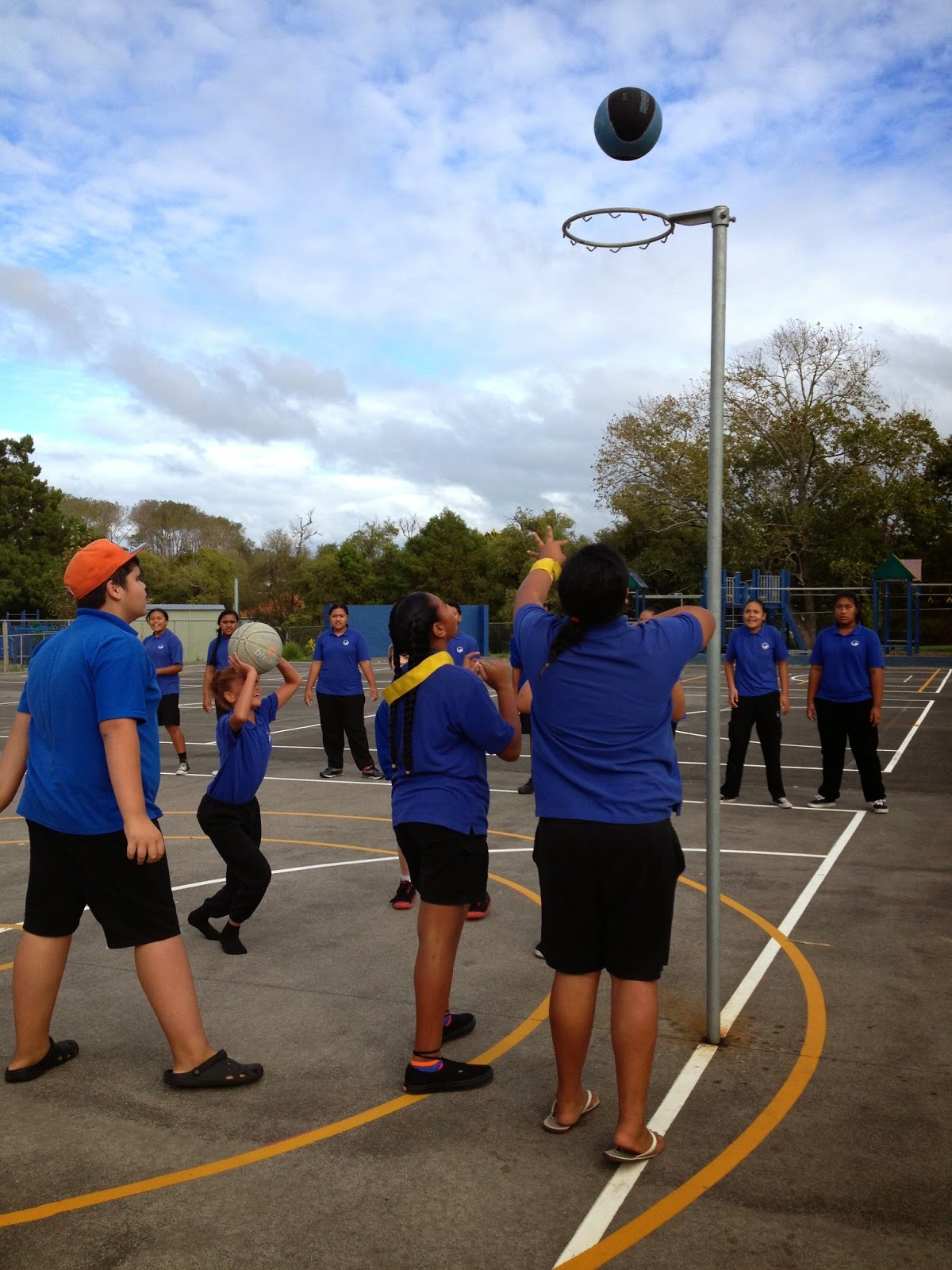 On Monday Mrs Raj and Mrs Parker were delighted with the students who had handed in some of their Rangitoto Home Learning Challenge.

We had our final Basketball Lesson with Coach Steph on Tuesday, where we were able to apply all of our dribbling, bouncing and passing skills in some quick fire games. 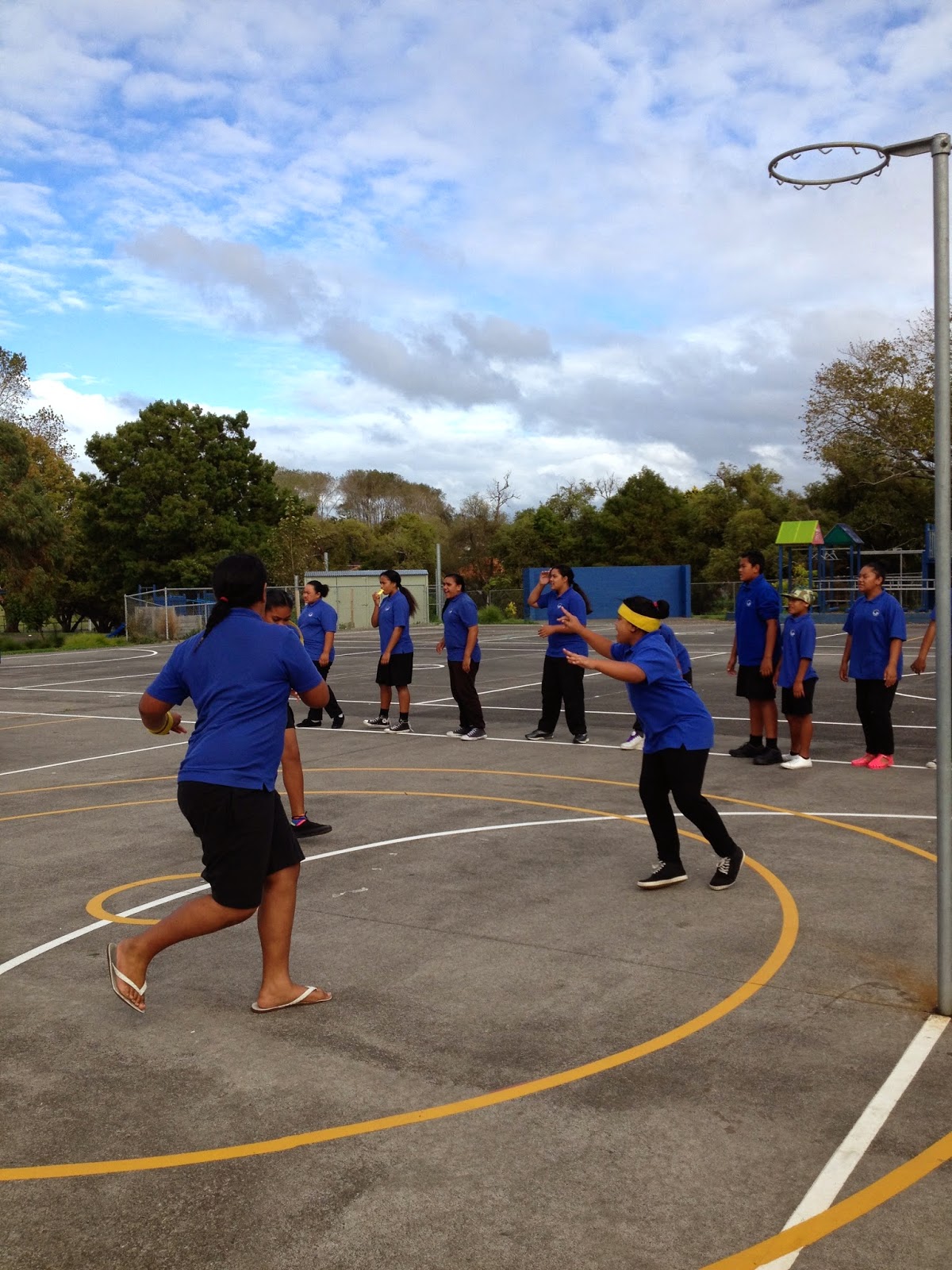 Everyone played really well, displaying great teamwork and real talent! Jack thanked Coach Steph on behalf of Glenbrae and told her that the thing he liked best was learning how to spin the ball on his finger.

We were spoilt with two Duffy presentations this week. A theatre, and a storyteller.
They were great fun, and asked for lots of participation. We enjoyed being an active audience.
Nunia, thanked the Duffy Theatre on behalf of the School, and Hannah thanked the Storyteller.

On Thursday we had a busy day finishing off our inquiry learning projects, and got to have fun reflecting on and celebrating our successes from the term.

The lunch time special event involved a netball game between students and teachers. All of the school came to watch, it was a fantastic atmosphere with everyone cheering! It proved that Glenbrae certainly has talent!

After lunch we had our final assembly which we proudly presented. Our wonderful MC's were Jerome and Gemima.
We opened with our Room 10 Pepeha, then treated the audience to a Samoan Sasa performance.
Awards were given to Edwina, Nunia, Alex, Eseki and Erina for their keen learning and role model behaviour while on our recent class trips.
Eseki and Alex spoke on behalf of the class to share what and how we learned during the term, then Hannah shared her beautiful voice with us in a song.
Finally Edwina led the school in our Karakia before we were dismissed for the Easter Holidays.

Happy Holidays everyone. Keep reading. Keep asking questions. And most of all keep BLOGGING.


Hello!
Our mountain is Mt Wellington
Our river is Tamaki River
We are from Glenbrae School
We live in Glen Innes
but we are student’s of the world.
Mrs Parker
and Mrs Raj are our teachers.
I am from Room Ten
Greetings to all.

On the 4th of April 2014, the years 7s, 8s and  the year 6s and 5s of room 10, 9 and 7 from Glenbrae School went to the Auckland Zoo to learn more about native trees and native birds.We left at nine and we traveled there by bus.


When we arrived there we proceeded directly to where the bird section.When we arrived we had three instructors which told us what we were supposed to do.We firstly went to where  the keas lived at the Zoo, they told us we had to stand still in order for the keas to come near us.The kea’s were olive green with curved pointy beak. They also told us if we put our hands out and try to touch them they would bite your hand off. When we finished we came out and moved on with the next instructor.

We moved on to the next instructor, we had gone to where the fantails, and tuis lived.We saw a lot of tuis and fantails.


After that we moved on to where kiwis live ,they lived at the night forest.They firstly showed us the eels that were not electric, then we moved to the night forest,they told us we had to be as quiet in order for the kiwis to come out, we saw a lot kiwis, then we came out and we all met at the our meeting place.


When we arrived at the meeting place they said  that we were going to be having lunch at the lunch place. After we had lunch we had an opportunity to see the different parts of the zoo. We saw a lot of animals like the crocodiles, spider monkey, baboons, porcupine, seals, hippos, tarantula, giraffes, zebras, reign dears, roosters, chickens and rhinos.Then we all returned back and headed back to school.

I learnt a lot about animals after that day and I would really like to go again. I was really exhausted and I my legs were sore.


By Siosifa
Read more of Siosifa's work here
Posted by Unknown at 09:42 No comments: 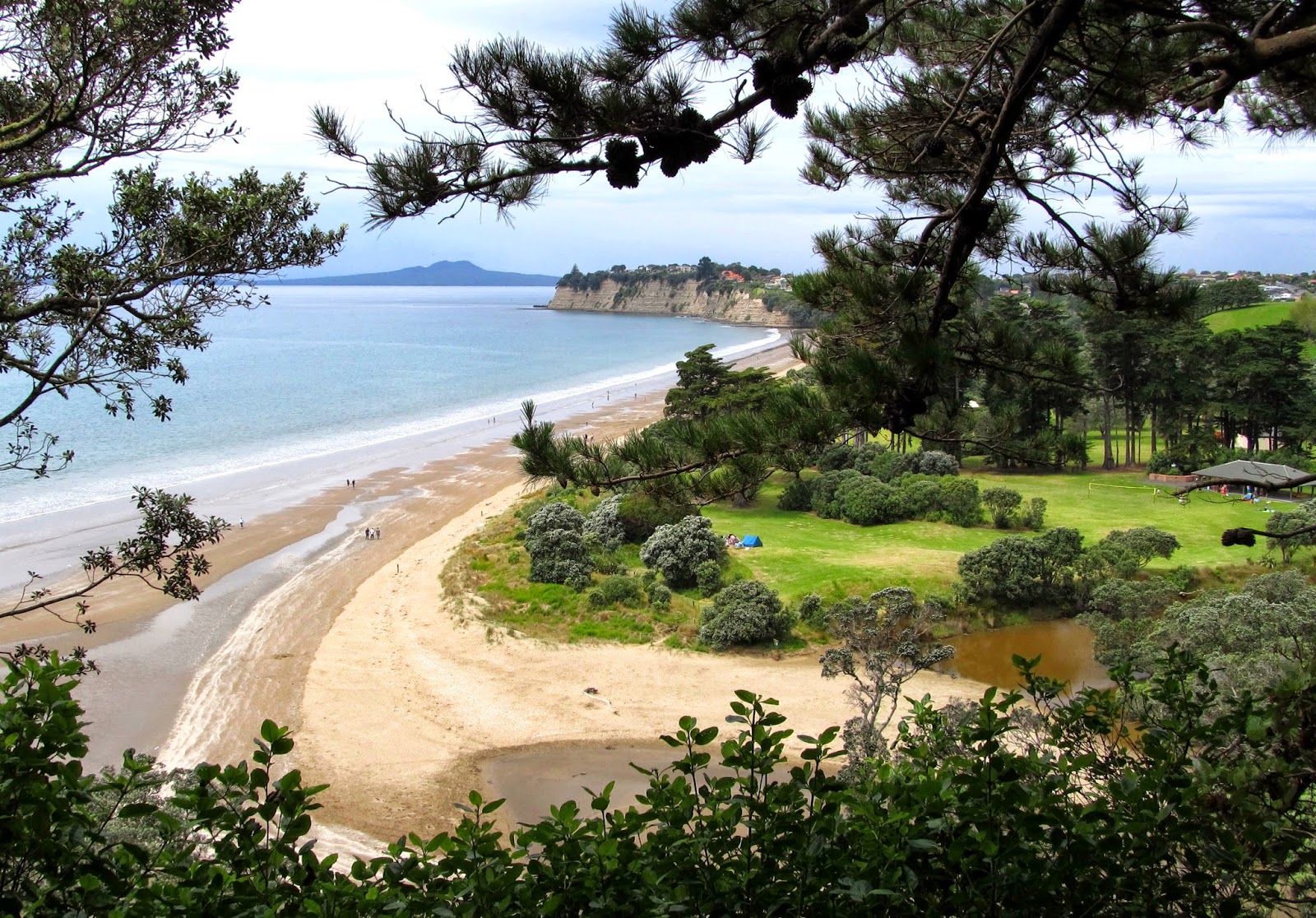 On Monday the 7th of April, 2014, rooms 9 & 10 went aaaaalllll the way up North to go to a beautiful beach, Long Bay. We went there to learn about what to do when we are in the wild and how we do things. As the bus driver dropped us off at the beach, a lady who turned out to be Sarah, led us to a little fale where three other instructors were. There was Sarah, Morag, James and another Sarah. There were three different activities we had to do. We were also put into three different groups. My groups first activity was with Sarah. We were learning how to pitch tents and cook sausages, camping style c: She took our group while the other groups went with their instructors. First, we had to get the instructions off her to start pitching and cooking. We started off with the pitching. We were split into three groups. My group and I started pitching our tent and tried to beat the other groups. And happily, we beat them at pitching it and taking it down, putting them neatly back in the bag. Secondly, we started cooking our sausages. My partner was my friend, Eseki. She and I had a sausage each and we cooked them on a pan. We were told what to do BEFORE we had to start cooking our sausages. When she finished explaining EVERYTHING, we started frying our sausages. We sat in somewhat we call a 'circle' with frying pans for every partner. It didn't take that long for our sausages to be cooked. It only took like 10 minutes for it to cook and then we eat it.  When my partner and I's sausages were cooked we ate them with bread and tomato sauce. It was definitely delicious !

The next activity we did was the stretches with Morag. Stretches are something we use to help someone with an injury when we are hiking in the wild. But first, we had to remember what we need. Like a whistle, hat, rain jacket, first aid and a lot more. We had relays at first, we had to run down to the other end and grab one thing from the box that we need when we are in the wild. It was really crack up because whenever I ran, I always ended up doing a little trip. We kept on doing that until we actually got the chance to make stretches with long, thick sticks and a few warm, strong sweaters. There were two groups and we had to work on our own, how to make the stretches. But we got some help from our instructor and our group teacher. We worked, worked and worked to try and make it 'till  we finally did it. When it was properly made, we started carrying people one by one on the stretcher and act like they had an injury that we are trying to save. Everyone had a turn, especially our teacher AND instructor. It was hilarious !

After that activity, we had lunch back in the fale. We met everyone else there with food gripped in their hands and putting it in their mouth like there life depended on it. I ate 'till I was full when it came to last 40 minutes that we had. During that 40 minutes, my group went on a bush walk with James. When we met him, he told us that he was pretty much ... lazy. So, WE had to do all the work with a little bit of his help. We took our maps and discussed which way the leader will take us and I was the first leader. I made my first steps and we headed up to where the water was. We had to stop there, and James told me to choose a different person to be the new leader. I chose Eseki. She led us to where she wanted us to go. We went almost to the top of the mountain we were on. But, during that walk, different people has been having turns being the leader. I really enjoyed that walk. I learnt about different islands that we saw during the walk. We also saw the Rangitoto island during the walk, too. It was really fun !

Finally, it came to the very last minute of our trip. That was when we had to go back to school and head home. We sang a little song before we left and said our goodbyes. I was really fascinated with the views I saw. It was really beautiful. I felt free, again. I also learnt how to make really steady stretches, how to pitch a tent properly, how to cook sausages and how to read a map when you are going somewhere far. I really enjoyed that day and I hope we get to go there again.

By Hannah.
Read more of Hannah's blogs here
Posted by Unknown at 09:36 1 comment: 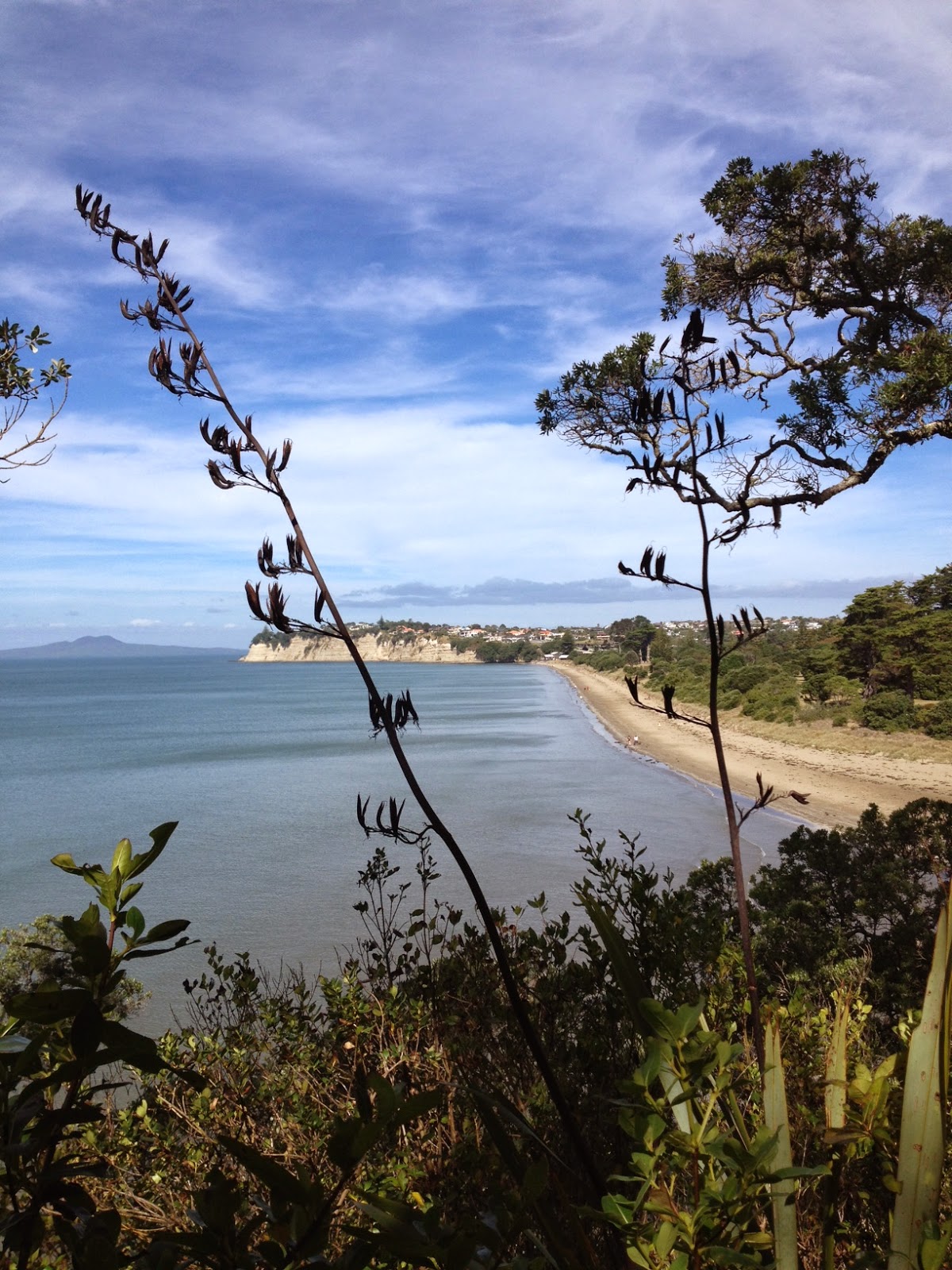 On Monday the 7th of April, Room 10 and the year 7 students from Room 9 took an hour long bus trip to Long Bay National Park. This was part of our survival in the wild inquiry learning topic.
Long Bay Outdoor Challenge enabled us to participate in heaps of hands on learning activities.

We pitched tents, cooked on small campstoves, packed bags with hiking equipment, made stretchers and navigated maps and signs on the bushwalk. What a busy day, lots of us fell asleep on the way home! 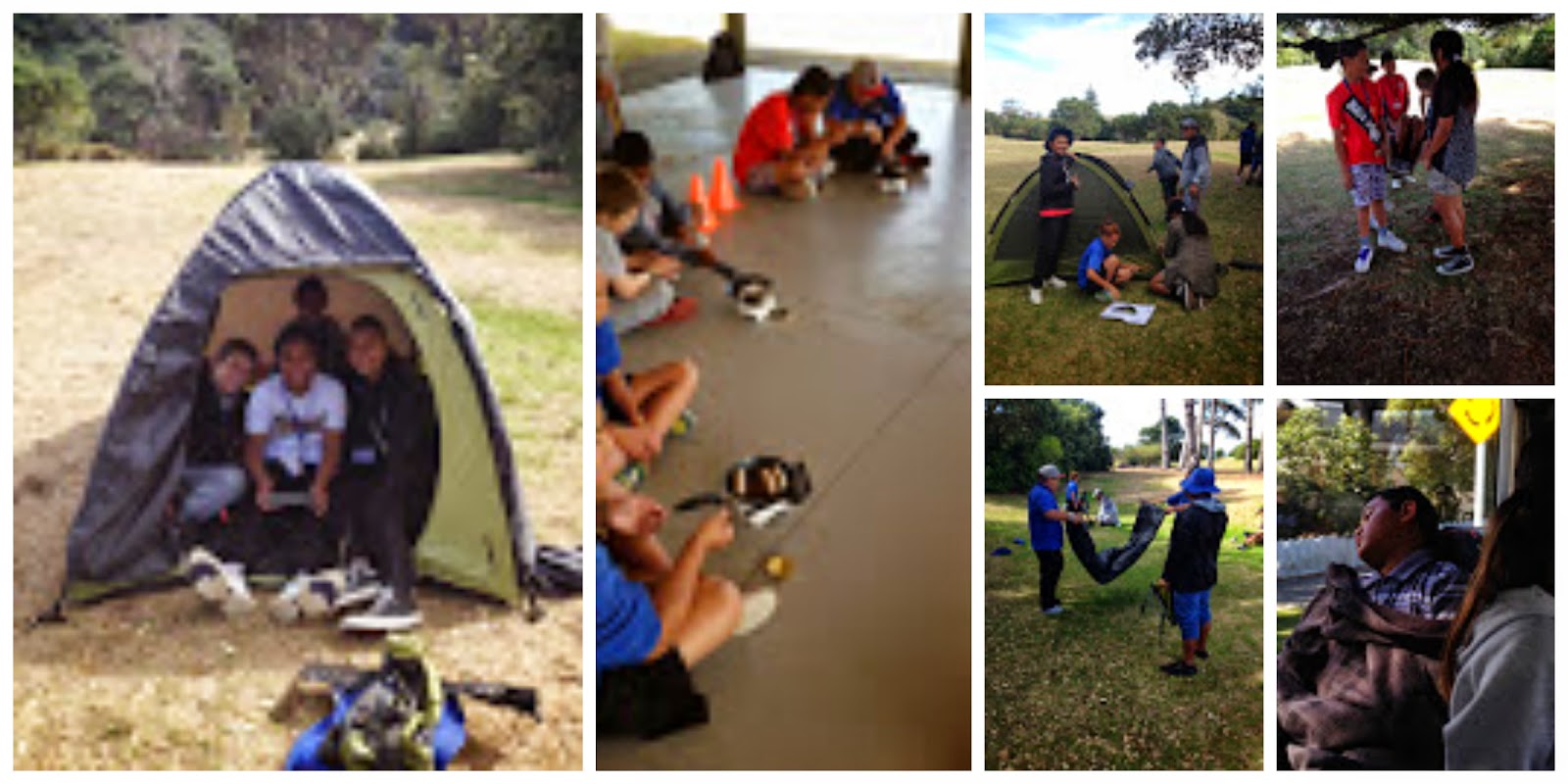 To read more details about the trip - visit our class blogs
Posted by Unknown at 09:33 No comments:

Glenbrae goes to the Zoo 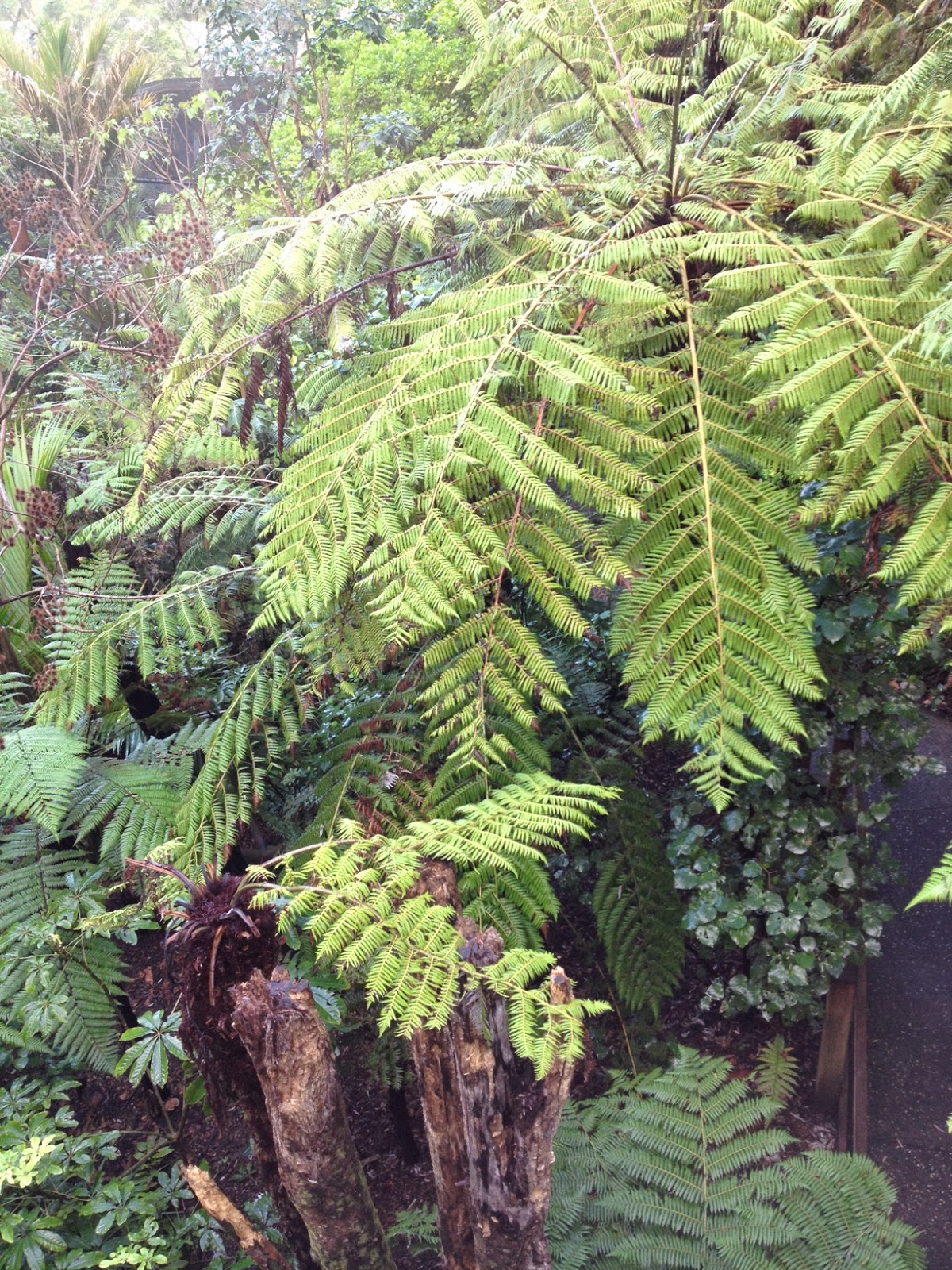 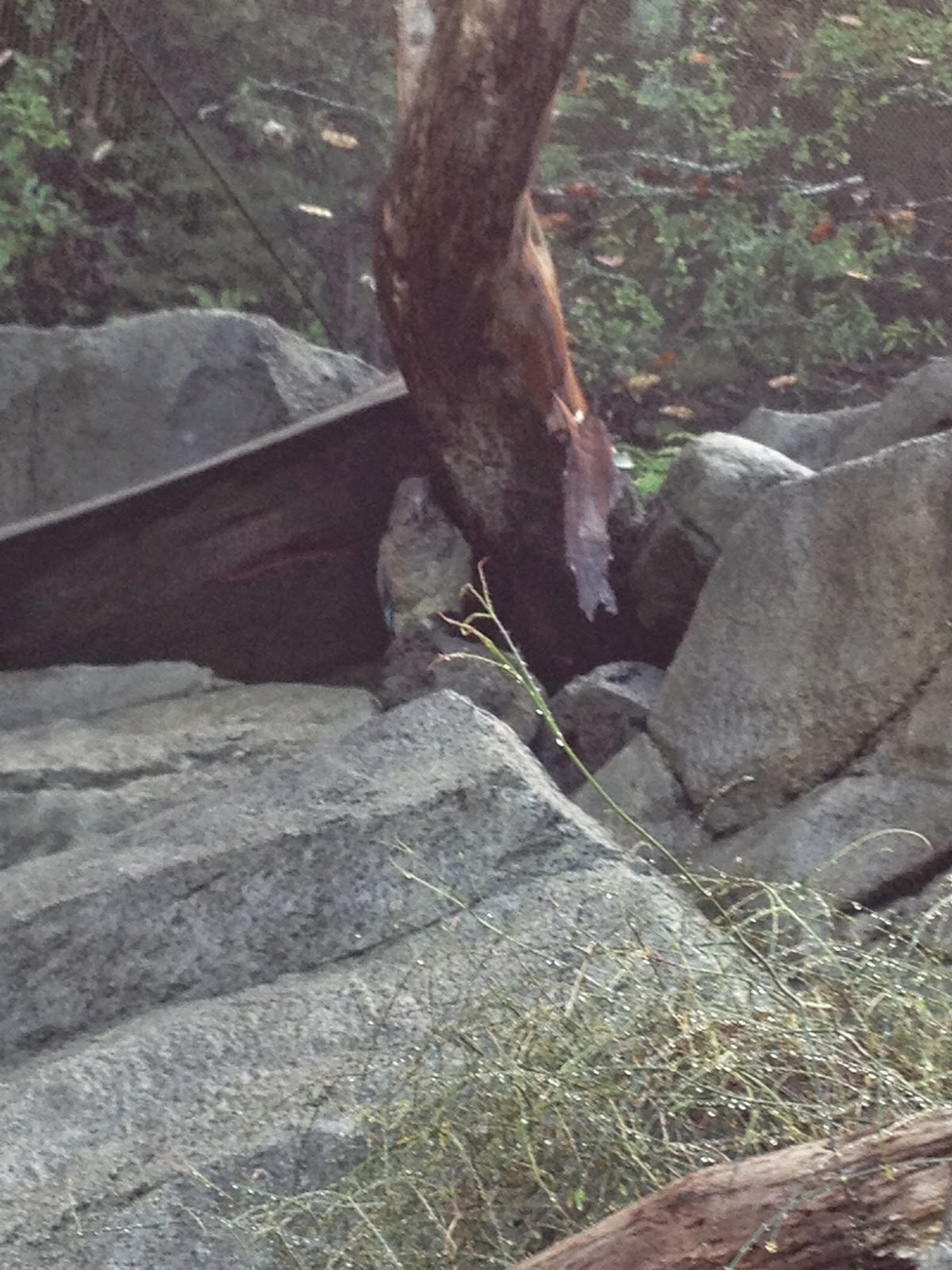 Today was no ordinary school day.
We arrived at school bright and early and joined Room's 7 & 9 on the buses to head to Auckland Zoo.
We spent the morning in the NZ native habitat's and saw many of the trees and birds that we had been learning about. The Kea were very curious and not too shy to get up close to us. 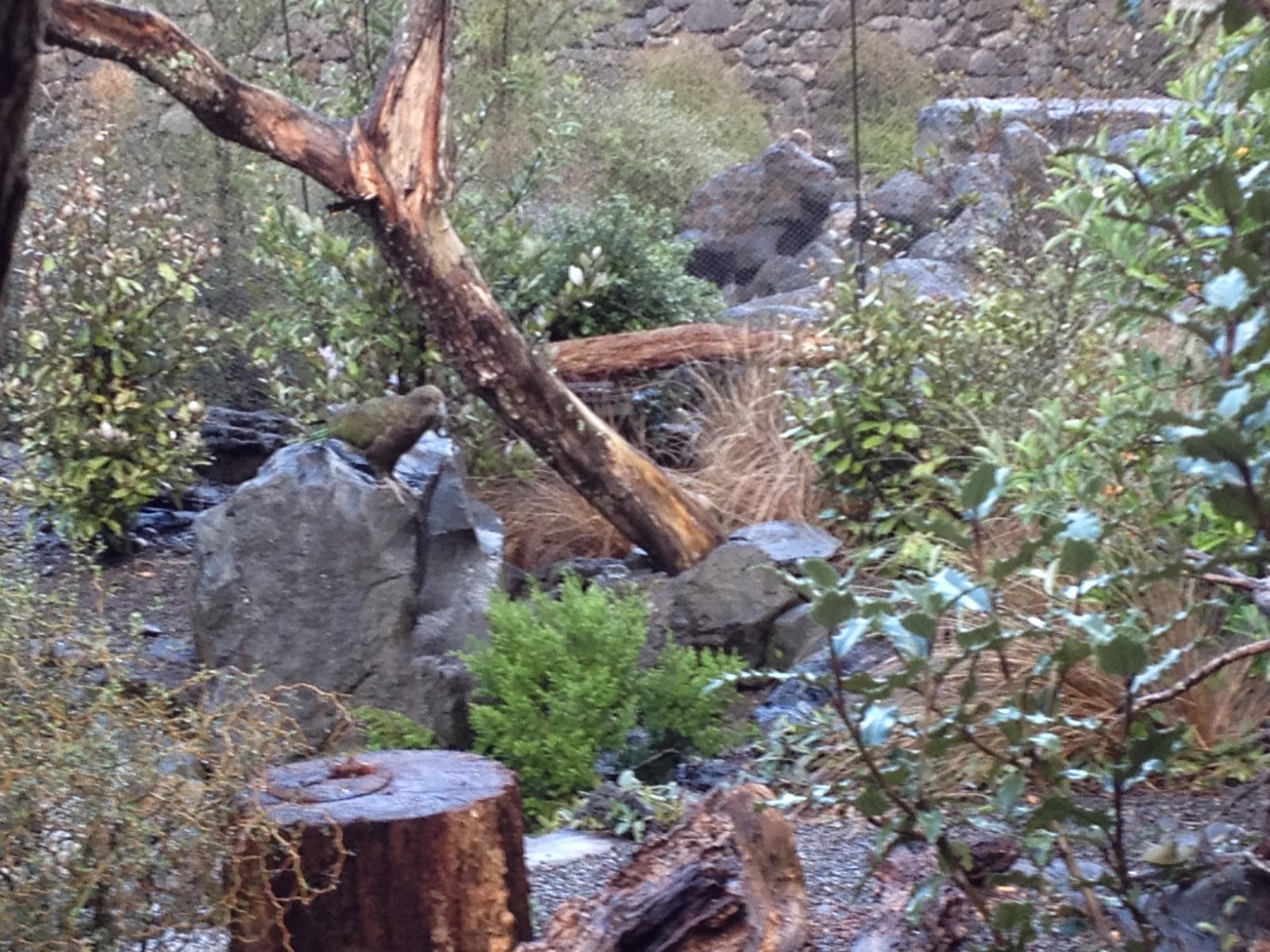 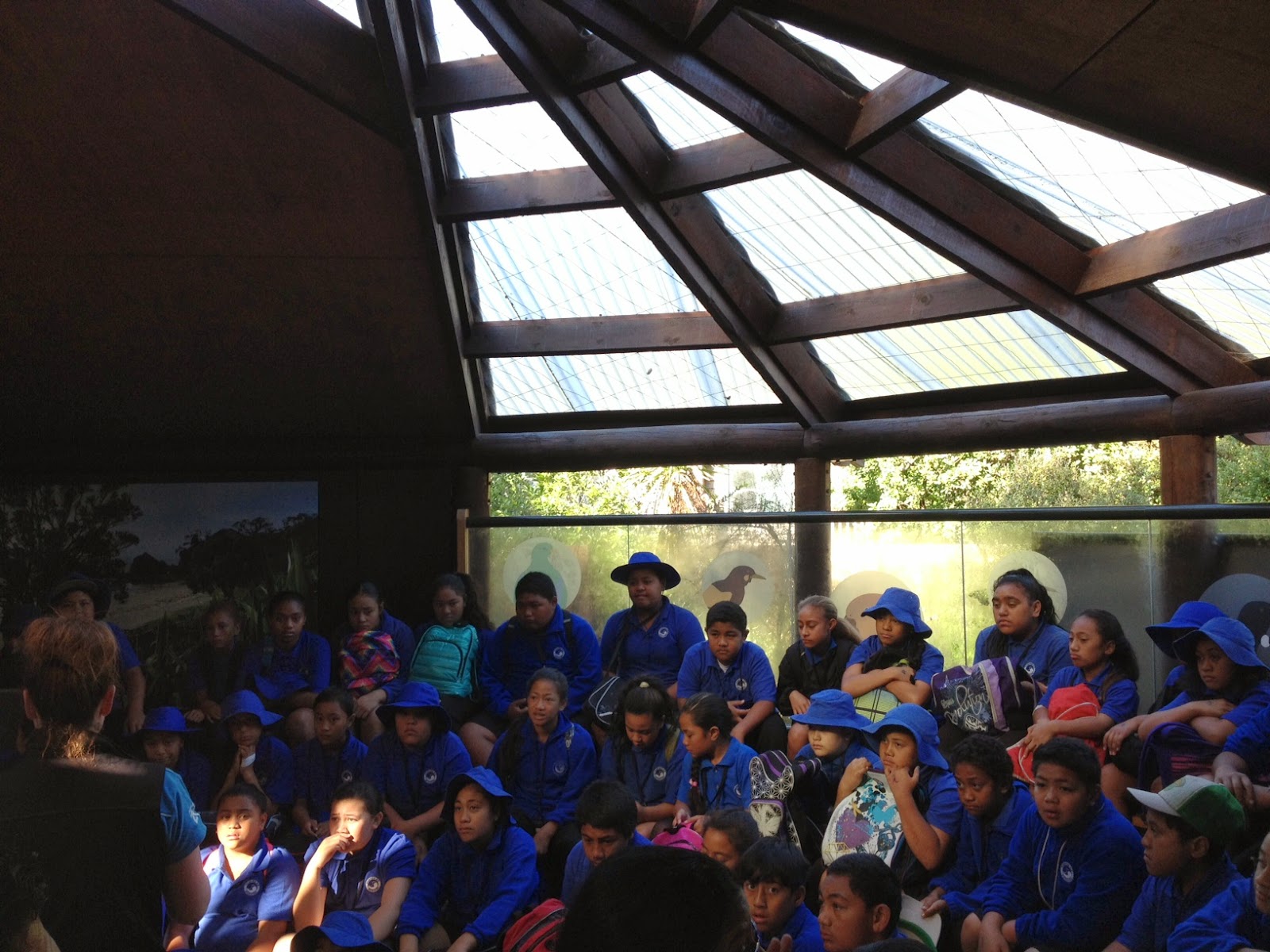 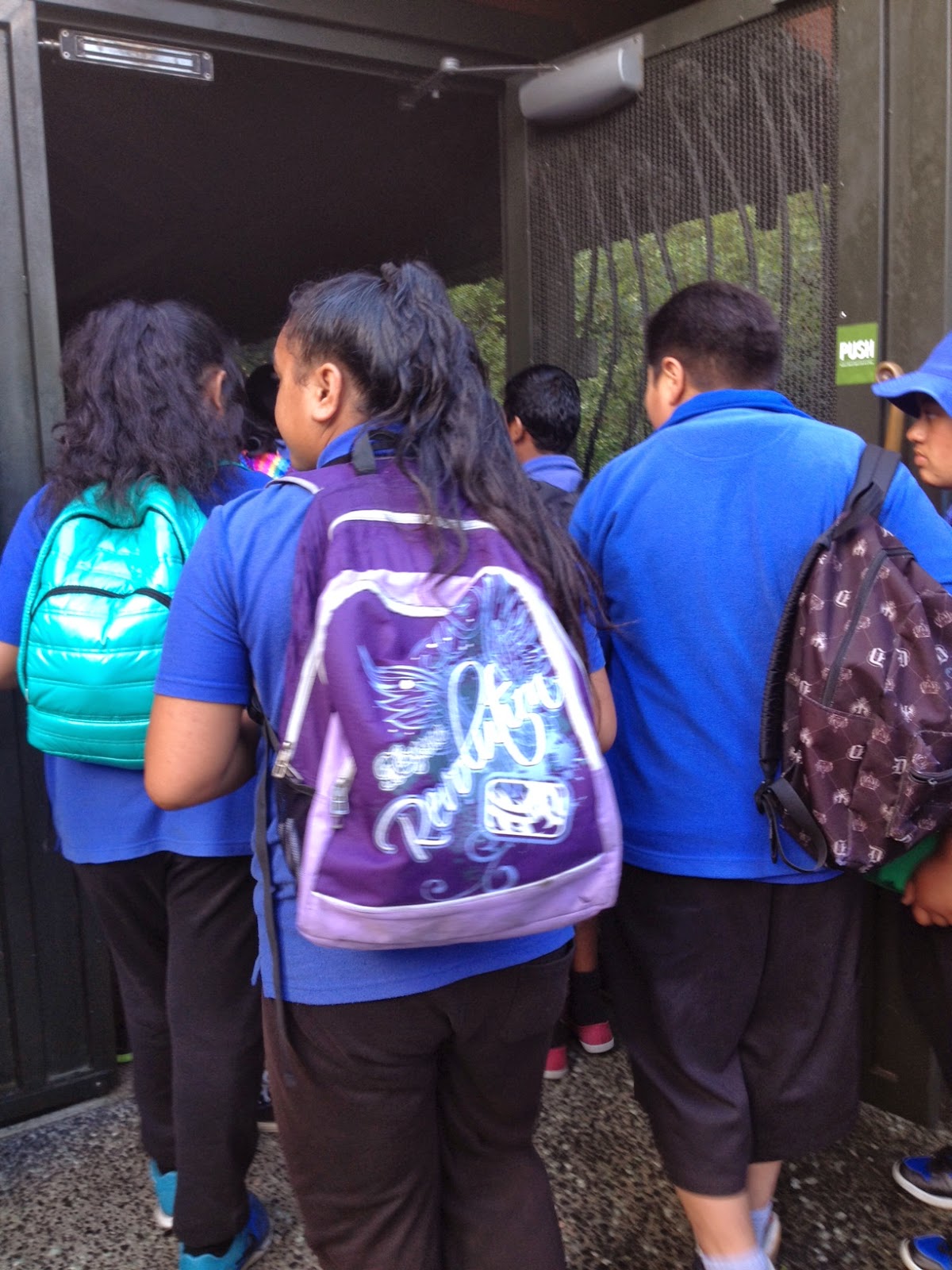 To get into the habitats we had to go through double doors, closing the first door, before going through the next. Sometimes it was a real squeeze fitting everyone in!
The double doors were not so much to keep the birds in, but to keep other creatures out. Stoats and cats like to prey on the native birds which are protected species.


After our lunch we had to pick three animals we wanted to see before we had to catch the bus back. We studied the map and decided to visit the three animals spread out over the entire Zoo. We went to visit the Siamang Gibbon monkey's in the far left corner of the zoo, then the Elephant in the far right corner, then the Giraffe's. This meant that we travelled all over the Zoo and got to see lots of other animals along the way!

We saw the Orangutans, Seals, Hippopotomi, Baboons, Cheetahs and Flamingos just to name a few...
Have a look at the map below and see if you can work out which path Mrs Parker's group took! 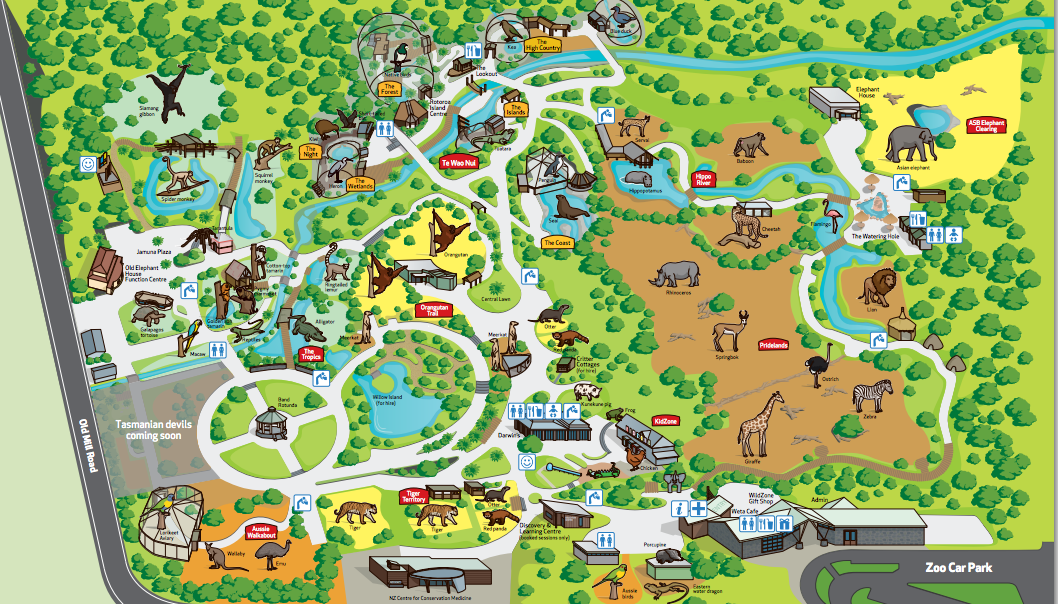 It was an awesome day at Auckland Zoo... Stay tuned to our individual blogs for our personal recounts of the day.