We went to M.O.T.A.T to learn about simple machines.
Our tour guide was  Melissa.

At M.O.T.A.T we first looked at a car engine. Then we looked at  some other machines that make electricity and steam.

Then we went to the Simple Machines room. In the room we pulled each other and Mrs Raj up on a pulley. Mrs Raj thought that we could not pull her up but we did! Then we moved on to our next activity. 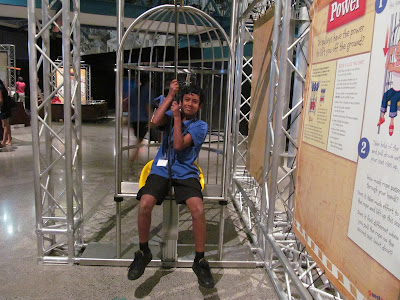 After our tram ride Melissa took us upstairs  and showed us lots of simple  machines like ones that can hold doors. During our lesson Melissa set us a challenge . Each  group had to build our  own simple machines. I took photos  of all the simple machine at the end of our lesson.  Then we had to  take our simple machines apart .

The last activity we were allowed to participate in was the mirror maze, it was a confusing activity.

Then we went outside to see the new exhibits such as military trucks and guns.

It was an awesome day for me and my favourite activity was the mirror maze. I would like to thank the M.O.T.A.T people for the  the wonderful displays  .

By Douglas
Posted by Mrs Raj, Glenbrae at 18:37